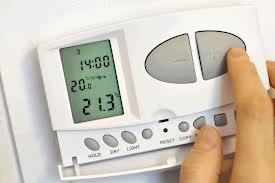 Air conditioning has, in the past, struggled to shake off a slightly negative image. This was due to energy consumption, but what many people fail to realise is, that times have moved on in the last few years. Old stigmas are hard to shake, but air conditioning designs are actually beneficial for us is many ways, so what are the health benefits of air conditioning?

Not only are they cost effective, they can also heat homes, as well as cool. They don’t use up valuable fossil fuels; they are portable – they can be moved around and come in sleeker styles than ever before. Often seen as a luxury for the super-rich, air conditioning units are nowhere near as expensive to buy as they once were either.

Not only that, but air conditioning is actually good for your health. So, not only is there mobility and economical bonuses involved, but positive health implications too. Not many people think about how air conditioning actually affects the surrounding air, but it’s definitely worth considering as an added benefit.

During intensely hot days in the summer, the weak and vulnerable are usually the first to suffer. Having air conditioning blowing cool air around can dramatically lessen the effects of dehydration or heat exhaustion. Promoting comfortable surroundings is a huge health benefit that air conditioning provides.

The quality of the air is radically improved by having air conditioning. If you have an allergy, then be rest assured that the air conditioned room will reduce the amount of irritant particles in the atmosphere. As well as this, you won’t have to open the windows as often in summer, helping combat pollen intake, as well as noise pollution.

Surrounding yourself with cleaner air is positive for your health in lots of ways. It helps fight against build up of mould in your property too. This is another major factor that creates respiratory issues. Mould can leave your health, as well as your property with some very negative side effects. Allowing it to develop and spread in unseen areas is a big gamble. Having air conditioning ventilating your home will help in the protection against mould issues.

Air conditioning solves many problems and not just controlling the temperature of the interior atmosphere. It isn’t widely known enough, just how beneficial to your health it is to have air conditioning installed. With so many great properties for promoting a healthy lifestyle, you should look into investing in air conditioning.

Why is the Air Conditioner taking longer to heat the office in Winter? 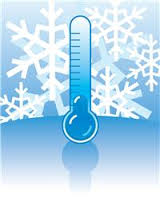 When you set the air conditioner to cooling mode, the refrigerant within the system absorbs heat from the indoor air and this is then moved to the outdoor unit where it is expelled to the surrounding outside air (if you feel in front of the outdoor unit you will see the air coming out of it is warm).

When you set the air conditioner to heating mode, the refrigerant within the system absorbs heat from the outdoor air and this is then moved to the indoor unit where it is expelled into the office (if you feel in front of the indoor unit you will see the air coming out of it is warm).

When its cold outside there is less ‘heat’ for the refrigerant to absorb which in turn is then transferred to inside thus it can take longer for a system to heat an office when its cold outside.  Modern systems for the UK market can provide heating to a room down to an outside temperature of -15C but it takes longer to do this.

The use of timers means you can start the Air Conditioner system before people arrive into the office (thus the room can be heated & be comfortable before staff arrive).  When the temperature drops to below 0C we recommend that people keep their systems turned on in heating mode throughout the night but at a lower temperature (say 18C), this means the office temperature doesn’t drop that low which means it won’t take as long to heat up to the preferred temperature set point.

You might think that this is a waste of electric but there is evidence to show that you actually use more electric in trying to raise the temperature in an office from say 12C to 22C than by leaving the system to ‘tick over’ at 18C overnight before raising it to 22C.

So, now you know why the Air Conditioner takes longer to heat the office when it gets colder outside! 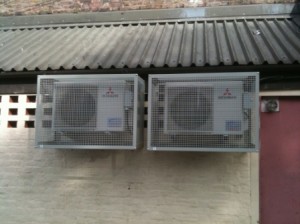 What a problem to have, your air conditioning is not blowing out cold air!

If the indoor unit filters are clogged this restricts airflow getting into the unit, if airflow is restricted then performance of your system will be seriously affected, if you know how to access the indoor unit filters have a look, if theyre dirty give them a clean, if you havent had your system serviced recently then now is the time to book a service, cleaning filters is just one of the tasks our engineers carry out when servicing an air conditioning system.

If your system is definitely set to ‘cooling mode’ and the set temperature is lower than the current room temperature then the indoor unit should blow out cold air, if it doesn’t then there is a problem with the system.  Most modern systems have a ‘self diagnosis’ function and the system should enter into a fault mode and a fault code displayed, this is either in the form of an error code (such as E1) or is in the form of a blinking led sequence (example – one of the led lights on the unit will flash in a sequence such as 3x blinks then a pause then 3x blinks again).  If this happens try to make a note of the fault code and give us a call with the fault code – this can save time in getting your system repaired, for example a 2010 LG wall mounted system may display a fault code of the green led light continuously blinking once, then a long pause before blinking once again, we can look this up and know that there is a problem with the indoor temperature sensor, we know that it is highly likely that the indoor temperature sensor is faulty and your system requires a new sensor, as such we can order the new sensor and then come along on one visit to repair the system thus getting your system repaired as quickly as possible.

The above tend to be the common reasons as to why an air conditioning system doesn’t operate correctly, if in any doubt consult an expert Air Conditioning Company with trained FGas Qualified Engineers, a good engineer will relish the challenge of testing his knowledge  & skills in order to diagnose a fault and get your system fully working again.

There are 2x modes which allow a temperature set point to be made, cooling mode and heating mode.

The answer to this question is that there is no answer – everyone is different and will therefore like a different temperature, from our experience the general norm setting in cooling & heating mode is around 22C.

Setting your Air Conditioner lower than 21C in cooling mode is normally regarded as too cold and is generally a waste of electric in trying to cool the room this cold, likewise trying to heat a room to higher than 24C is generally a waste of electric – most people set their home thermostat to approx 22C so you should set your Air Conditioner to the same temperature.

Keep Cool in the Office

Temperature set points can cause arguments within an office environment; we have found that men generally like the temperature lower compared to women, we have one customer whom has a mixed office and on a service visit we found that the women had all moved to one end of the office whilst the men had all moved to the other end of the office, the office had 2x air conditioner units and they found this way the men & women each had their own system – a tad extreme but nonetheless solved the office bickering.

In summary we would recommend a temperature set point of approx 22C.

For many decades now, air conditioning has been at the forefront of providing us with a more comfortable interior ‘climate’. This has enabled our homes and businesses to thrive in conditions that would otherwise prove difficult to work in effectively.

If you are wondering whether you need air conditioning, you should first try and gauge the effort you spend making your environment comfortable. Do you often have to open your windows to create more airflow? Do you open doors for the same reason? Do you need to have fans switched on to cool the room? If you do for prolonged amounts of time, then perhaps it would be beneficial to get air conditioning, especially if you have to spend a lot of time in these surroundings.

The beauty of having air conditioning is that it is so easy to manage. Nowadays, the systems can be remotely controlled or even timed to switch on at certain temperatures, meaning that your indoor climate is simple to operate and maintain.

You may think that air conditioning is only suitable for countries along the equator, but this is not the case. As summers seem to be heating up year on year, just a few weeks of intense heat can affect many facets of daily life, from tiredness, to stress, right through to illness such as heat exhaustion. If you own a shop, then customers would definitely spend less time in a muggy, un-air conditioned space, than one that is. Staff members too, will soon begin to feel the heat and pressure and this affects productivity. 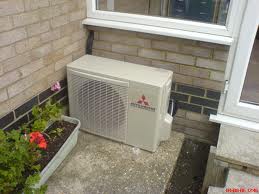 It isn’t as well known, but air conditioning can heat up, just as well as cool down rooms, so it is well worth factoring this into any decision. You may choose to heat your property with the air conditioning, rather than using up the gas central heating. This all purpose functionality is what makes air conditioning a truly great option. Couple this with a dramatic fall in price of air conditioning units, an increase in technological advancements and a whole array of new designs, including portable models and the answer to your problems seems easier than ever.