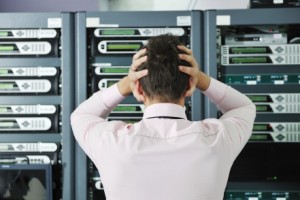 Why is Server Room Air Conditioning Important? A Server Room is quite possibly the most important room within a company, nowadays all of the pc’s, telephones, cctv & access control systems are all controlled from this room, its such a critical room that failure of a server room can result in the temporary shutdown of a company, an office full off staff whom cant use their pc’s or telephones isn’t a productive office.  Servers & IT equipment doesn’t like to get hot, as such we are often asked to install Air Conditioning into a Server Room to keep the room at a reasonable temperature whereby IT equipment happily runs at optimum efficiency.

We size up the required system and then tell the customer that they need 2x systems so that they have a back-up should one of the systems fail, ‘Oh no we don’t have the budget for that’ is what we often here, ‘Well what are you going to do if the system fails and then your servers start to shut down when the temperature gets too hot in the room?’ we ask, ‘Hmmm good point but there’s no budget so we can only have 1x system’.  We know this is a mistake which the client will one day regret as we so often see the panic and stress associated when an air conditioning system fails within a server room but we can only advise.

So, we were recently called out to a client in Worthing whose Air Conditioning System had failed within their Server Room, temperatures within the room were 32C and rising and the IT manager was getting extremely worried that his servers would start shutting down when the room temperature reached 38C (we did warn you of this 5years ago didn’t we?) it transpires that a sensor within the outdoor unit of the system has failed and we need to order a new one, lead time is 5-7 days as the part is coming from Europe, this customer now has a big problem – a problem which could have so easily not been a problem if they had originally installed a back up system.  We suggest they borrow one of our portable air conditioners but this involves venting an exhaust hose out of a window which cant be done as it poses a security risk with leaving a window open overnight, we then suggest venting the hose into the room next door but the server room door is alarmed and needs to be shut in order for the alarm to be set during the night, only option was for the IT manager to shut down all the servers at night time and re-start them the next morning when he could have windows and doors open – a nightmare situation for the IT manager!!

An Air Conditioning System when installed in a Server Room operates 24hours a day, 365 days a year, this is on average 3x more use than a system installed within an office would get (normal office hours would be 8hours a day whereas a server room system is on 24 hours of the day thus 3x more usage), so when your air conditioning system is 5years old its actually had 15yrs of normal use, when you think of it like this you can see why a Server Room system is more likely to fail the longer its been in service.  Not only is regular servicing / maintenance an absolute must for these systems to keep them working in tip-top condition but being a mechanical product with moving components one day one of these components could fail.

If you have a server room and you only have 1x air conditioning system in there think about what impact it would have on your company if that system failed – could your company continue to function? Do you need the hassle & the stress? More and more manufacturers are holding spare parts in Europe, when we order its a 5-7day lead time, having a back up Air Conditioning System would save so much stress, hassle, work downtime and grief that it has to be cost effective to have one, just the peace of mind is a good enough reason, for a free of charge no obligation quotation for a server room Air Conditioning System or to add a back up system give us a call on 01273 803820 or send us an email to sales@climachill.co.uk